Baskets are not usually considered “art.”  They are made by regular people for practical purposes.  But sometimes there’s an artist working in a traditional medium that is so innovative and original that the quotidian is surpassed and voila! There’s a fucking sculpture that happens to be made out of willow fiber.  Dat So La Lee (real name Louisa Keyser) was so skilled and so creative she made baskets that belong in museums, that are unquestionably art, and that are ridiculously beautiful.

We aren’t exactly sure when Louisa Keyser was born, but it may have been around 1829 in Nevada.  As a member of the Washoe tribe, she learned the art of basket weaving as a young girl.  Baskets were essential to life in the Great Basin: they were used to store food and drink, in cooking, to separate seeds from their chaff, to carry babies, and in ceremonies.  But they were not just practical items, they were aesthetic as well.  And Keyser made the most fucking aesthetic baskets there are. 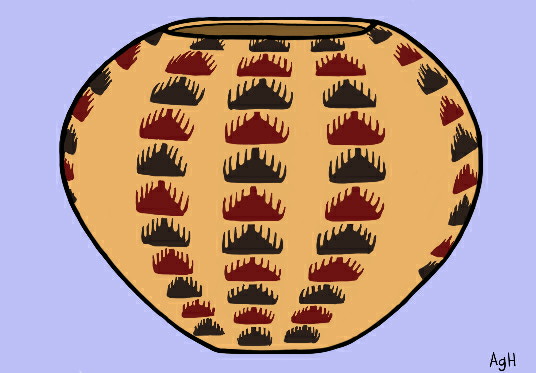 Keyser made a living doing domestic work and in 1895 she was working as a laundress for Abram and Amy Cohn.  Abram (or Abe) saw her baskets and was so impressed he offered to sell them in his clothing store.  The Cohns wanted exclusivity as her art dealers and offered in exchange food, lodging, and medical care as needed.  Over the next 30 years they documented all of her work and managed her artistic career.  While the Cohns did make sure Keyser was cared for, comfortable, and able to practice her art, they were also big fat liars and prone to hyperbole.  They decided the baskets would sell better if Keyser had a more Native-American-y sounding name and changed her name to Dat So La Lee.  The name has no meaning and was purely a marketing stunt.  Much of what they say in their records is untrue, but we do know that Keyser made an estimated 300 baskets in her lifetime.  Nevada bought 20 of her baskets in 1945 and sent half to the Historical Society and half to the State Museum.  Four of those baskets were stolen in 1979 and took 20 years to be recovered.  Keyser’s baskets were included in the “Tahoe: a Visual History” exhibit at the Nevada Museum of Art in 2015 and are part of the Smithsonian’s collection.  Keyser died in 1925 in Carson City, Nevada, after a four-day death ritual performed by a medicine man.  Her grave reads:

There is a historic marker nearby commemorating her. 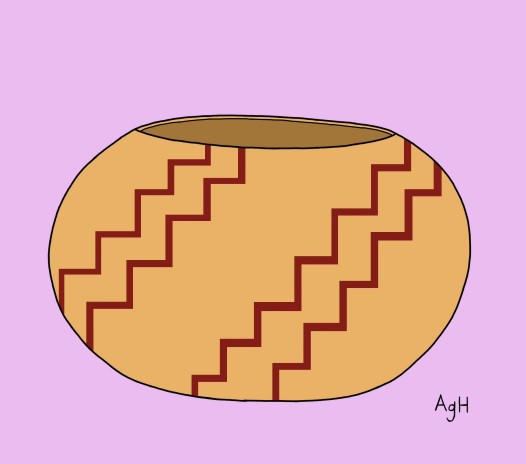 But what was so cool about her baskets and how did she make them?  The three primary materials were willow, bracken fern, and red bush.  All three are native to the Washoe lands.  The bracken fern was dyed in the mud to get a deep black color.  The willow was taken from under the bark and cut to a thickness of 1/33 of an inch or less.  Keyser would begin a basket with three willow rods and then weave in willow twigs, bracken fern, and red bush.  On the surface of the basket, there are about 35 stitches per inch; a large completed basket has over 50,000 stitches.  No wonder it could take a year to create one piece.  The style Keyser used and made her own was called degikup.  Degikup baskets were round and watertight.  Keyser created a shape that was flat on the bottom, flared out, came back in, and had a hole on top the same size as the bottom.  A few of her baskets flared out and did not come back in, creating a wide mouth at the top, but these are rare.  Keyser did not read, write, or sketch and all the designs and patterns were done in her head.  She took a traditional craft and transformed it into art and that makes Louisa Keyser, aka Dat So La Lee, pretty fucking awesome.

The Victorian Era.  Women were bound by corsets, morality, and domesticity, stuck at home caring for their children and attending to their husbands’ needs.  Or not.  Yes, the Victorian period was stifling and oppressive for women, but there were some groundbreaking women who didn’t let it get them down.  Meta Vaux Warrick Fuller was one of those awesome ladies.

Fuller was born in 1877 and was already creating sculpture and drawings in high school.  One of her works was chosen to be in the 1893 World Columbian Exposition.  She won a scholarship to the Pennsylvania Museum and School of Industrial Arts (now the Philadelphia College of Art).  Fuller graduated and traveled to Paris in 1899 to continue her studies.  In Paris, she attended the Academie Colarossi and the Ecole des Beaux-Arts.  She met and became friends with W.E.B. DuBois.  Fuller also met Rodin and he told her, “my child, you are a sculptor; you have the sense of form in your fingers.”  While in Paris, she exhibited at Samuel Bing’s L’Art Nouveau Gallery and at the Paris Salon.  After kicking ass in Paris, Fuller returned to Philadelphia in 1903.  She continued her artistic studies at the Pennsylvania Academy of Fine Arts.  Fuller worked in plaster and clay; most of the sculptures were also bronzed.  In 1909, Fuller met Dr. Solomon Fuller, one of the first African American psychiatrists in the United State, and they were married.  They moved to Massachusetts and Fuller built herself a studio with her own hands against her husband’s wishes.  Hell yes.  She had three sons and continued sculpting as well as doing housework and raising the kids.  So, yeah, awesome.

In 1917, she became the first African American woman to receive a United States government commission.  Fuller created 14 works for the Jamestown Tercentennial Exposition.  Lest anyone forget what the country was built on, the tableaux showed scenes of slaves arriving in America and the home life of black Americans in 1617.  Fuller exhibited her work at the New York Public Library, the Boston Public Library, the Harmon Foundation Shows, and at the Making of America Exposition during the 1920s.  Apparently, Americans could not get enough of Expositions back in the day.  In 1957, Fuller was commissioned by the Afro-American Women’s Council to create 10 sculptures of famous African American women.  Meta Vaux Warrick Fuller died in 1968.  Her first retrospective was in 1984 at the Danforth Museum of Art.  Her work is in the collections of the Schomburg Center, Radcliffe College, the Museum of Afro-American History in Boston, as well as at the Danforth Museum of Art.  Why her work is not more widely known or in more museums’ collection is probably due to her being a woman and an African American and it’s a fucking shame. 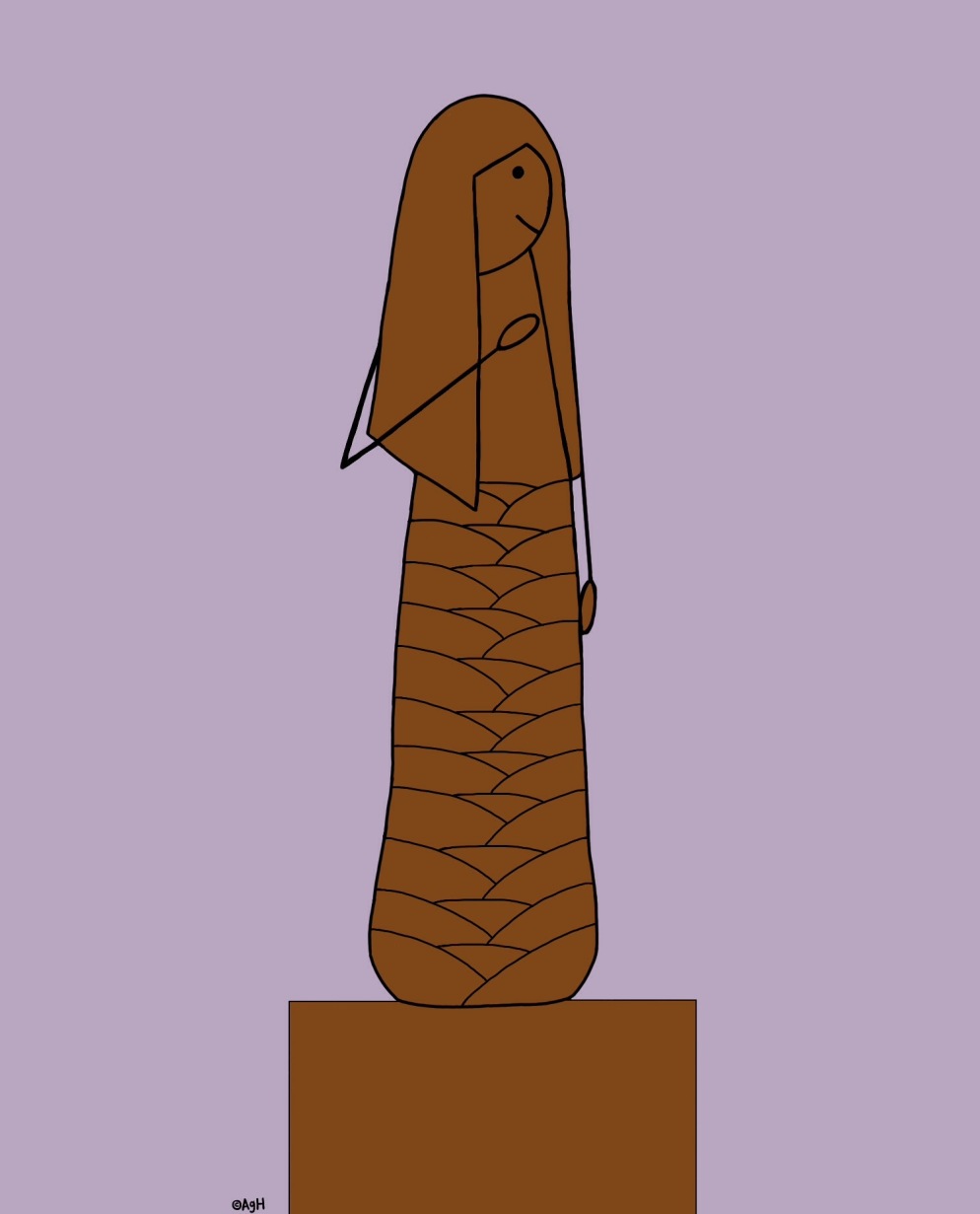 Fuller was incredibly spiritual and very aware of the plight of African Americans in the United States during her lifetime and throughout American history.  These issues permeate her work.  In 1914, she created Ethiopia Awakening.  This sculpture shows a woman whose legs are wrapped up like an Egyptian mummy but whose torso and head are emerging from the bindings.  It is a figure of a woman coming out of confinement and into her own personhood.  It creates a visual link to Africa, the continuing heritage of African Americans, and references the ideas of Ethiopianism.  In 1919, Fuller created a visual tribute to Mary Turner, who was lynched with three others who were suspected of planning to murder a white person.  Fuller was an artistic pioneer.  She utilized African American subjects, an aesthetic that blended African American and African styles, and addressing the racial disparities and oppression African Americans faced; and all before the beginning of the Harlem Renaissance and the birth of the idea of the New Negro.  She used the link between black Africa and black America to show a rich, complex artistic and cultural heritage and to decry colonialism and racism. 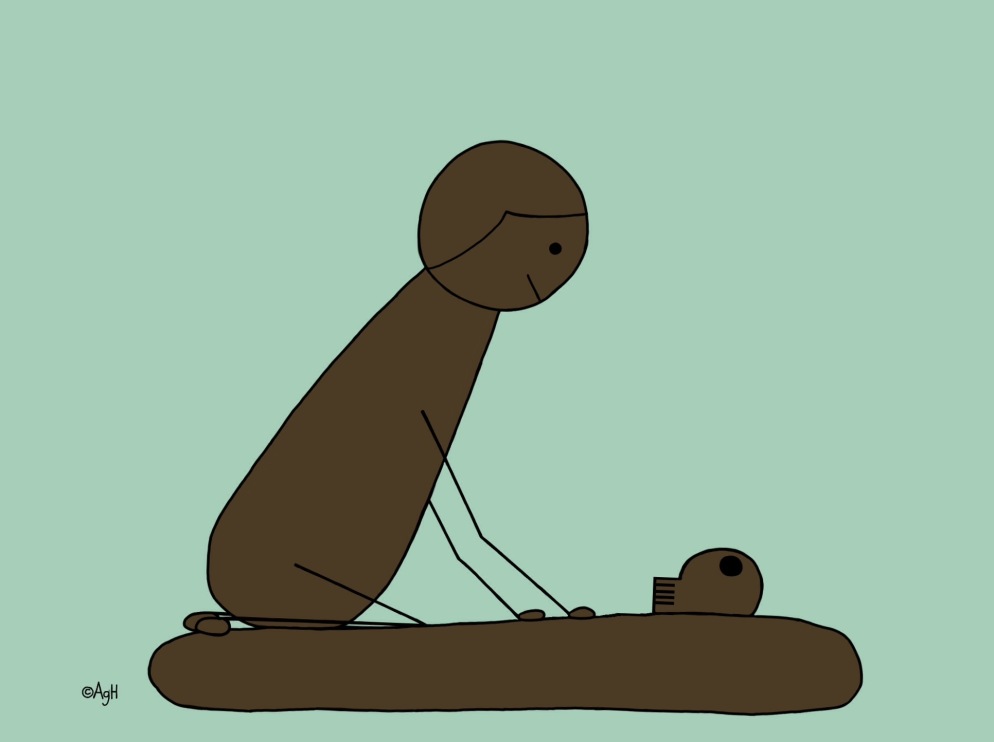 In 1937, Fuller made “Talking Skull” showing a man on his knees with a skull on the ground in front of him.  It is a clear depiction of the link between the past and the present, and the presence of death (or the threat of death) in African American lives.  Her work has often been called “dark” or “macabre,” and maybe it is, but it is also inspiring, proud, and complex.  Meta Vaux Warrick Fuller was an amazing artist, a kick-ass woman, and someone who helped shape one of the most important American art movements in the 20th century.  Fuller is full-on awesome.