Australia.  It’s known for the beautiful, harsh Outback, the stunning coral reefs, and about a million things than can kill you.  Seriously, there are easily a million bastard death beasts there.  Eastern brown snakes, saltwater crocodiles, funnel web spiders, taipan snakes, common death adders, tiger snakes, redback spiders, box jellyfish, blue ring octopus, more snakes.  Even the ants can kill you.  Basically, unless it’s a koala with candy and a “pet me” sign, don’t touch anything.  Out of this rugged, potentially lethal landscape, though, comes some great art.

Meet Queenie McKenzie (also known by Oakes, Mingmarriya, Nakarra, and Garagarag).  She was born sometime between 1910 and 1930 in East Kimberley at Old Texas Station.  Her mother, Old Dinah, was an Aboriginal; her father was a white horse breaker who was not present in her life.  At the time in Australia, there was a super fucked-up policy of assimilation which authorized the government to take mixed race children from their parents and raise them in orphanages.  So wrong on so many levels.  McKenzie’s mother managed to avoid losing Queenie, blackening her skin with charcoal to make her appear darker.  McKenzie spent her childhood cooking, tending to the horses, and driving cattle.  She met Rover Thomas when he found employment on the ranch and they were life-long friends.  She married a man named Charlie McKenzie and adopted a son.  She had lots grandkids and many dogs.  Yay, dogs!  McKenzie did lots of work for the community in Western Australia.  She helped out at health clinics, did outreach for alcoholism, and taught the Kija language and culture in schools.  She was also very active in ‘women’s law business.’  McKenzie did not start making art until the early 1980s.  She mixed her own pigments out of natural ingredients and bush gum.  Her work told stories of her life, the history of the area, and the Dreamtime.  She mostly painted landscapes, some with some figurative elements, that combined spiritual and quotidian themes.  At first McKenzie signed her paintings with a fingerprint.  Later, she learned how to write her name.  By the 1990s, McKenzie was commercially successful and had exhibitions and workshops.  In 1998, she and seven other artists created prints for the Sydney Olympics and she was declared a “State Living Treasure.”  She died that year, 1998.  Her works are in the Holmes a Court Collection and sells at auction for $8,000-15,000.

McKenzie lived her whole life in Western Australia, first at Old Texas Station and then at Warmun (Turkey Creek), with little to no contact with Western, white culture.  Her art was deeply connected to place, the land and the people McKenzie spent her life getting to know.  She said in an interview “Every rock, every hill, every water, I know that place backwards and forwards, up and down, inside out.  It’s my country and I got names for every place.”  Her paintings show landscapes filled with the rocks and hills and rivers she knew.  Occasionally, there are native animals, like kangaroos and mook mook owls.  Others feature small figures in the landscapes and tell stories of her life and the history of the Aboriginal people in East Kimberley.  The paintings are all filled with colors straight from the earth and stories straight from the people. 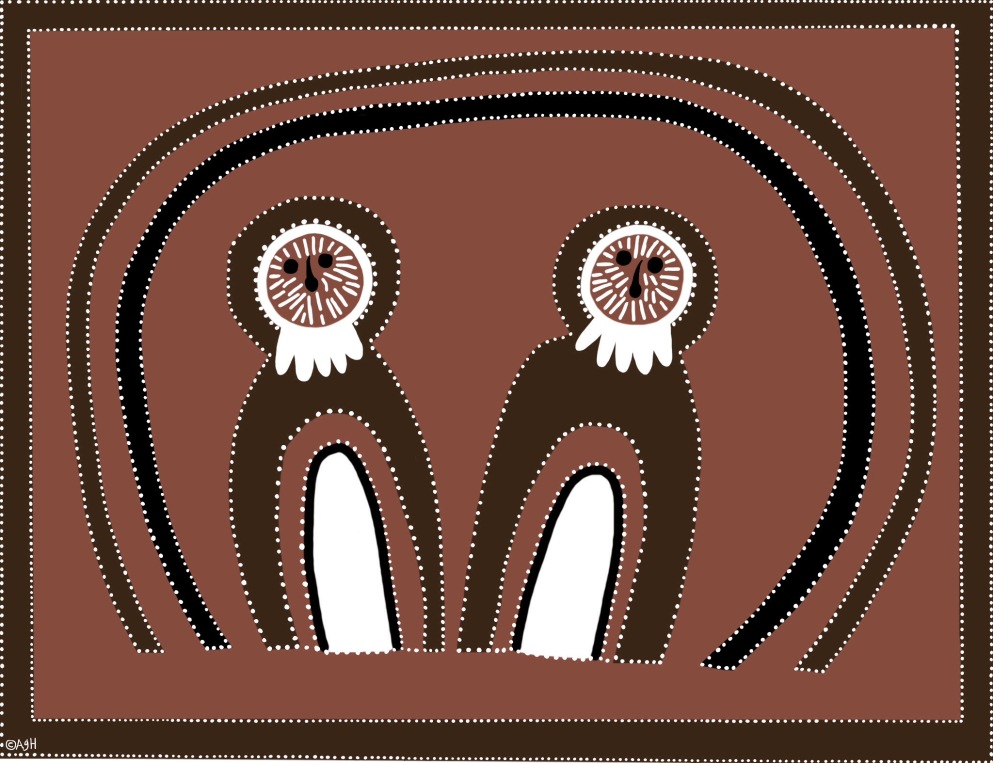 Queenie McKenzie lived up to her name.  She was in love with her land and its people; she was generous and culturally proud.  She skillfully blended ancient traditions with modern life and created moving, beautiful works.  McKenzie was a super cool woman and amazing artists and she remind us to never give up our urge to create.  Fuck yeah, Queenie.  You rock.